Last week has been all about testing and further development of the AIRone. On Friday, 3rd of April, medical professionals from the Leiden University Medical Center and the Erasmus Medical Center came to visit our faculty to perform a series of user tests on the ventilator. Positive feedback, as well as useful tips for further improvements, were given. The following days, the team focused on incorporating this feedback into an improved version of the AIRone. As a result, different additional modules were built into the ventilator, such as an alarm that triggers when an excessive or insufficient tidal volume is observed. Also, it was noted that, at high breathing frequencies, the expiration phase was not as fast as we would like it to be. Due to high resistance, the expiratory pressure could not drop as fast as desired. This issue was solved by adjusting the valve responsible for the expiration, allowing a higher flow of air.

On Monday, 6th of April, we had the honor of welcoming the Minister of Economic Affairs and Climate Policy, Eric Wiebes. He was given an explanation about OperationAIR and what we are working on. Also, we demonstrated the use of the AIRone ventilator and spoke with him about our initiative. We are very grateful for the support and the words of praise that Minister Wiebes gave us. For a look back on this day, we refer to this short video: movie.

Our team members are working long days: From 9 in the morning until 10 in the evening people are working at the university, every day of the week. One day, however, work did not stop at 10, as a small group of students spent the night at the faculty to test whether or not the AIRone could run for 12 hours straight. Luckily, the next morning the AIRone was still running: It passed the test! Other tests followed on Tuesday and Wednesday, such as the mechanical strength tests. This was performed in line with the official protocol, in which a metal ball was dropped on the casing. The AIRone also survived this test, not a scratch visible!

To improve testing efficiency with different subteams, a second AIRone prototype was built on Thursday. At this moment, two prototypes can be tested; one is always available for tests at external facilities, while the other one remains at the faculty. On Friday afternoon, a small group of team members paid a visit to the Erasmus Medical Center, with an AIRone prototype. At this hospital, electrical safety tests were performed as well as user-friendliness tests by an ICU doctor and nurse. These tests went well and some useful feedback was given by the medical staff. Based on this feedback, we are currently exploring the possibilities to build in a nurse calling system into the AIRone. Also, we will be trying to further increase the maximum breathing frequency the AIRone can offer, as well as a clearer graph visualization on the screen. Every week we take big steps and we keep raising the bar for ourselves. The next days, we will be working hard to further incorporate feedback into the next iteration of the AIRone. 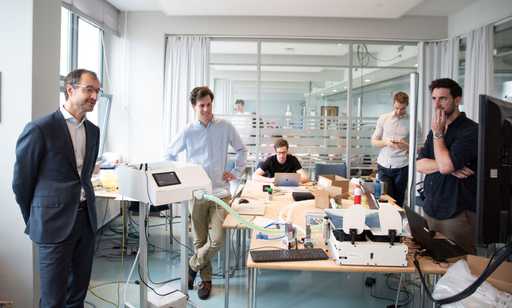